No relaxing Sunday morning at the Wildupnorth ranch yesterday, it was an early start and off to Amble (Meadow Well by the sea) to catch a boat to take part in a marine survey looking for cetaceans and birds. The 3 metre swell that had scuppered the survey on Saturday had dropped to 1.5 metres so we left the harbour at 8.40am with four souls on board.

While the sun came out to see us off, the temperature on land was -5 deg C, and as we headed 35 miles out, the horizon to our south grew darker and darker. And the sea got rougher and rougher! Eventually a blizzard hit.

The good news is that the weather cleared after half an hour and the survey continued.

One possible dolphin - a blow and a fin were seen by the skipper. 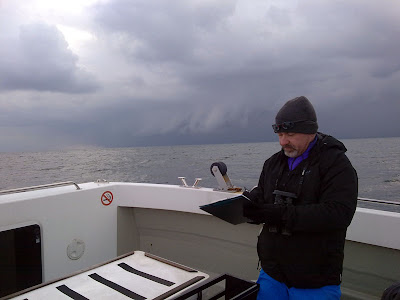 Martin 'Pelagic' Kitching hastily writes his Last Will and Testament.
Posted by Tim Sexton at 10:28