Another Couple of Ticks

Headed north today for a snowy scenes at Ross Back Sands and another Blogger tick - The Liverbird. He had more luck than me,  all I found was this dead Gannet. Still, it's another tick on the corpse year list along with Little Auk, Woodcock, Magpie, Pheasant and Woodpigeon. Only the last two joined me for dinner. 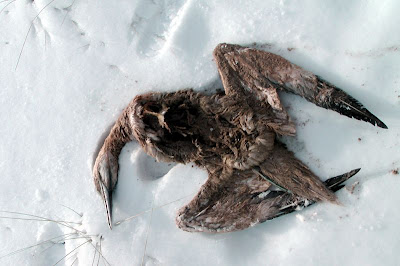 If you google Ross Back Sands there's an entry for it in The Naturist Fact File - and there are trip reports!
Trip Report - August 2003

"This beach is one of the best in the country, with fine golden sand and excuisitely beautiful views of Holy Island to the north and Bamburgh Castle to the south. Even in high summer there are only around a dozen or so people on this massive beach, which stretches for about a mile to the south of the access track and about two miles to the north. Apart from some serious walkers, most textiles don't venture far along the beach, and those who do don't seem to mind seeing naturists. Naturists (usually just one or two but on a good day as many as four or five) gather about 0.5 mile to the north of the track."

Email ThisBlogThis!Share to TwitterShare to FacebookShare to Pinterest
Labels: Ross Back Sands