Frosty start with a jingling ending

A new moth for the county was my quarry first thing, so a trip to Lambley in Northumberland to meet David who had trapped Northumberland's first Frosted Green Polyploca ridens, last Friday night. This is a moth you would expect to see in southern England. According to Heath & Emmet - 'Occurs in mature oak woodland, chiefly in the southern half of England and Wales where it is sometimes common, but it does not extend much further north than Lincolnshire in the east, and Cumbria'. Well it does now!


Next stop off was Allenbanks to see Pied Flycatcher and Wood Warbler. We parked at the National Trust carpark and after 100 metres along the river we had both target species singing. Getting a decent picture of either was another matter. What's needed is a canopy walk to get on level terms with them. Here's a couple of 'Up the Khyber' shots:
Having lugged my camera and tripod up to the tarn, and then down and along to Plankey Mill I was a bit disappointed with the photo opportunties - until I spotted these critters - Mining Bees. There are some 60 to 80 species in the UK and I would welcome a pinpoint ID on this one if anyone knows. Here's what they do:

After 5 hours at Allenbanks we returned to the carpark to be greeted by the jingling sound that means one thing, well two actually - 99s.

Far from the Madding Crowd

One of the great things about Northumberland are those hidden gems that you can enjoy without seeing another soul, even during the current holidays and fine weather. 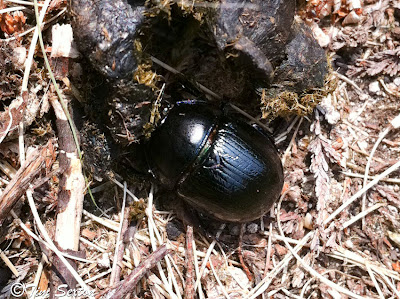 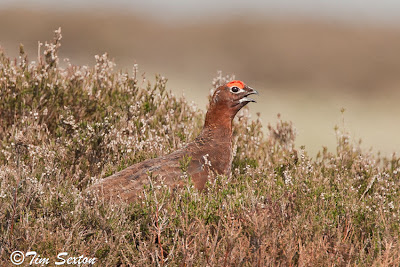 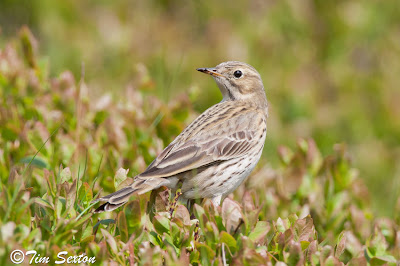 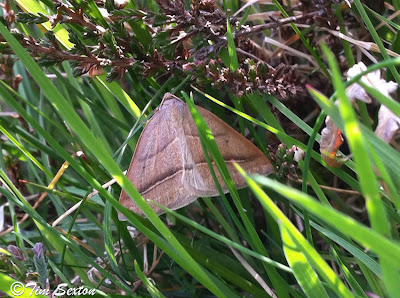 Today I went to Beacon Hill. The approach road gave me my first Whitethroat and Cuckoo for the year. In the wood...... 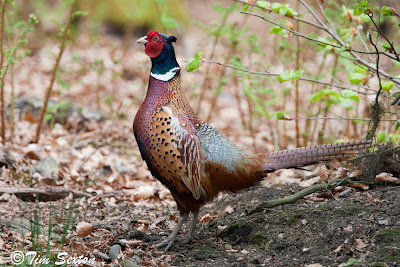 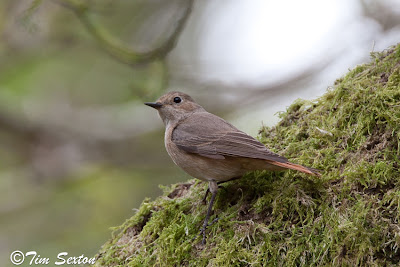 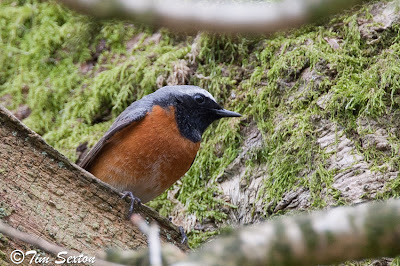 Redstart (male)
No Pied Flycatcher or Wood Warbler yet and no sight or sound of Mr Whippy.
Posted by Tim Sexton at 15:59 2 comments:

Our man in Havannah

An hour spent at Havanah Nature Reserve today was richly rewarded with a sighting of a Common Lizard - it ran over my foot!

Plenty of other wildlife on view including a possible sighting of a Water Vole and a couple of moths; one yet to be identified and one identified as 1251 Grapholita jungiella last recorded 13 years ago in 1998. 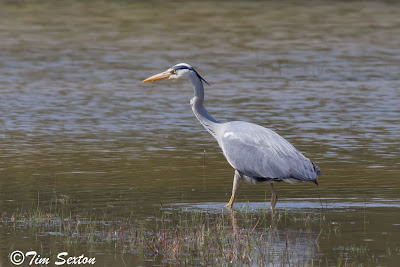 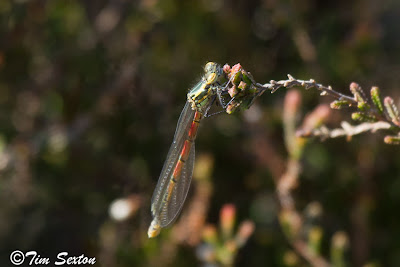 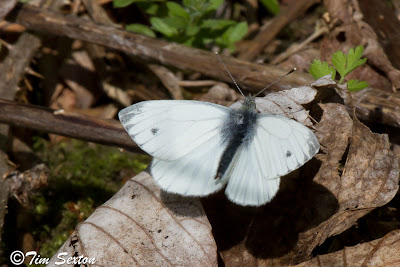 A search with Tom Tams for Emperor Moth today ended with the fantastic discovery of Adela cuprella, a rare 'Longhorn' moth last recorded in Northumberland by Bolam in 1889!

Five moths were observed flying and landing on the highest catkins of Grey Willow Salix cinerea.


This moth is probably under recorded as it appears in April flying high above flowering Grey Willow. If you are any where near rivers, lakes or wetland and you see Grey Willow, check above them with binoculars and look for small black triangular moths 'dancing' around flowering catkins. If you see any, please let me know.
Posted by Tim Sexton at 16:22 No comments:

This duck's no chicken 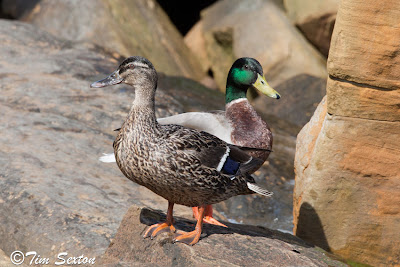 Sharpness Point in Tynemouth was the unlikely spot for a romantic rendezvous for a pair of mallards this afternoon. The male proved himself a worthy suitor by playing chicken with the breaking waves. 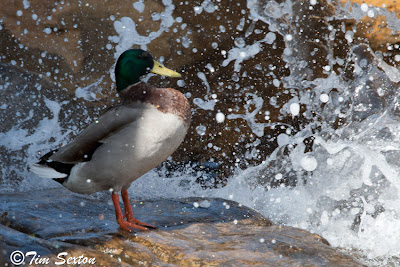 Email ThisBlogThis!Share to TwitterShare to FacebookShare to Pinterest
Labels: Mallard

I was in my front garden yesterday when a passer-by commented, "It would be peaceful round here if it wasn't for the f'ing seagulls". I looked up............. 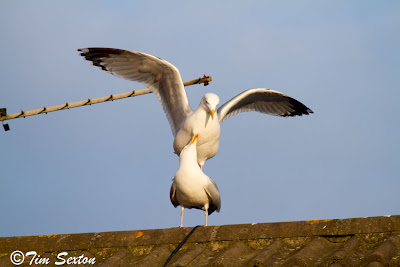 Reports of Lesser Whitethroat, Wood Warbler(!) and Grasshopper Warbler at St Mary's yesterday spurred me into a visit this morning. I found no warblers, not even a Chiffchaff. Plenty of hirundines, Linnets that would fly off if you got within 50 yards and a wetland without ducks. And no White-tailed Sea Eagle flyover :( 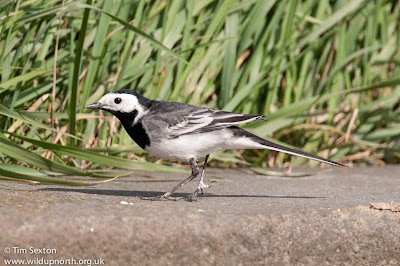 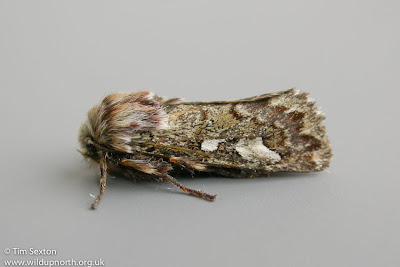 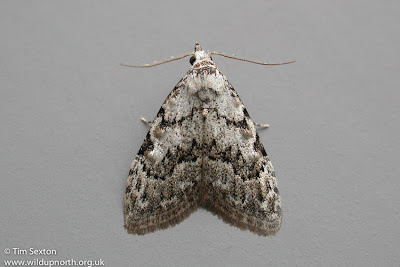 Admired from a distance - Black Scoter

A very distant shot taken from Stag Rocks, Bamburgh, Northumberland (it's the one on the left with the bright yellow bill. The other ducks are Common Scoter).
Posted by Tim Sexton at 18:03 No comments: 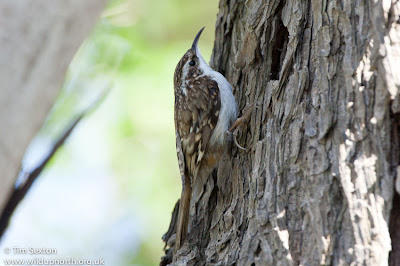 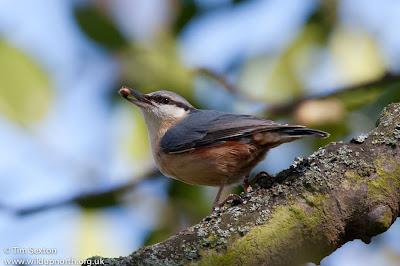 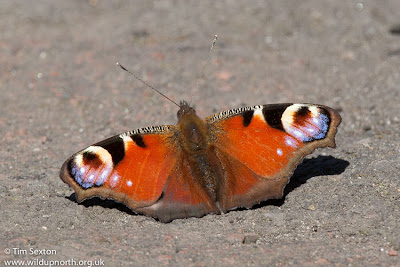 Worra corker of a day!

Work took me to Rothbury this morning and on the way back I headed for the coast to see the reported Shorelark at Druridge Pools and the Avocets at Cresswell.

A quick look/see at Hauxley gave me two singing Willow Warblers and my first Swallow for the year, nice!

At Druridge the Shore Lark was briefly seen but disappeared as I grabbed my camera. Never mind, the Wheatears, Twite, Sand Martin and House Martin kept my face straight :) 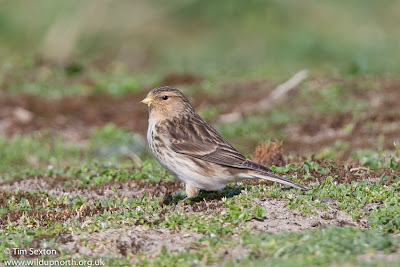 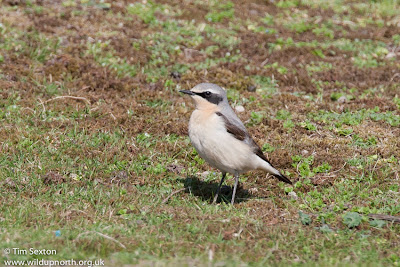 Wheatear
At Cresswell there were now six Avocets, two by the causeway - too far for a decent pic and with the sun behind them - so here's a 'record shot':

Avocet
A nice surprise was a Yellow Wagtail that appeared briefly before being lifted by an aggressive Meadow Pipit.
On returning home I had a call from Tom Tams to come and see the first V-Pug for Northumberland for 32 years, caught in his garden last night. As I arrived an Osprey flew over!!!!!!!!
If I score a hat-trick at footy tonight it'll have been a perfect day.
(All I got was a dead leg)
Posted by Tim Sexton at 19:47 No comments:

The horse fields at Seaton Sluice are always worth a check. They came up with the goods today with my first Wheatear of the year. 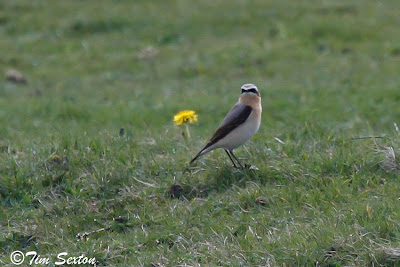 Email ThisBlogThis!Share to TwitterShare to FacebookShare to Pinterest
Labels: Wheatear

Corncrake in the Toon!

Corncrake Glug glug
Luckies opposite Newcastle Civic Centre has been refurbished by Weatherspoons and Corncrake is £2 a pint. Nice!
Posted by Tim Sexton at 19:34 1 comment: