Went to Prestwick Carr early this morning to photograph an SEO stretching and preening out in the open on a nearby post in lovely soft morning light. Like that was ever likely to happen.............

Thanks to Google Earth and the Rare Bird Alert plugin, here's a screen grab showing the reports of the Sandhill Crane today. Had I not chased after it, I could well have ticked it as it flew over my garden. Bugger!

Here's something you don't see every day!

I went down to Northumberland Park today and Tom was photographing an unusual beast sunning itself in the pond. A Red-eared Terrapin!

One thing we didn't see was the Mandarin Duck. It was there last night displaying to a Mallard. Apparently it comes and goes so hopefully it will return. It's very tame so defo an escapee. It probably took flight when a council operative turned up with a petrol leaf blower. I did, it's not only a complete waste of time (leaves are blown back by the wind seconds later), but incredibly loud. 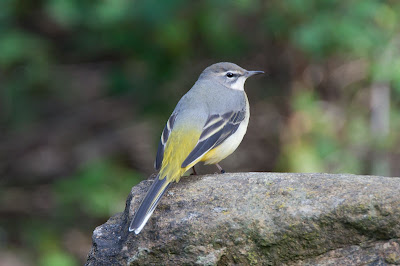 The Terrapin was joined by a very obliging Grey Wagtail.
Posted by Tim Sexton at 20:45 1 comment:

Wheatear, Whinchat, Chiffchaff, Pied Flycatcher and Blackcap were seen at St Mary's today, as some migrants arrive at last.

Our week long trip to the Isle of Mull, this September, was a last minute choice and we decided to visit during a window of decent weather. This meant booking accomodation was out the question, as most places are booked up a year in advance. So camping was going to be the name of the game. Having two dogs in tow also complicated the accomodation situation.

While on the subject of dogs, the local Deer Ticks are numerous and blood thirsty, so go prepared for your dogs to get a tick or five. And tuck your trousers into your socks if you go into long vegetation! Here's some advice on ticks.

The remains of Hurricane Katia hammered the Island on the Sunday, Monday and Tuesday, such that the ferrries were off all day Monday and Tuesday. We left Whitley Bay on Tuesday afternoon and managed to find accomodation in the form of a 'Heated Wigwam' near Loch Lomond.Very cosy.

Wednesday morning we headed for Oban where we got on standby for the next available ferry. They run every two hours, and the one about to leave when we got there was full, so we had to wait a couple of hours, which gave us time to stock up on supplies at the local supermarket.

We arrived into Craignure harbour, on Mull, after a crossing of about 45 minutes. We were disappointed not to see any dolphins on the crossing but did get a Manx Shearwater fairly close.

Off the ferry we drove a few hundred yards to the Shieling Holidays campsite and commenced battle with our 'quick erecting' tent.

It's worth pointing out that Craignure is a very good base for exploring the whole island - everywhere is within an hours drive.

Exhausted after sorting the tent, we went for an evening walkabout along the shore, and got our first sight of an Otter. Needless to say it slipped away as soon as it saw my camera - a recurring theme during our trip.

Our first full day on Thursday started with clear skies, no wind, and most importantly no midges. And it remained that way all day. Midges were about, but gave us very little grief during our stay. And outside our tent in the morning, a Red Deer! This explained the haunting bellows throughout the night - or does it?

We decided to 'do' the North of the Island so headed to Loch Na Keal first. Here we had White-tailed Sea Eagle very close up, and Golden Eagle high above the ridge North of the Loch.

We left Loch Na Keal and went onto the Isle of Ulva where you park up and get a ferry across for a fiver return, including the dogs. The Boathouse on Ulva serves excellent scran and is a good place to scan the peaks on Mull - we spotted a couple of Hen Harrier rising on the thermals.

Ulva is very tranquil with some well marked routes for walking. The deciduous woodland had Great Spotted Woodpecker and Treecreeper to add to the trip list. Speckled Wood butterflies were everywhere.

After a couple of hours on Ulva we drove to Calgary beach and then onwards to Tobermory for fish and chips.

By the end of Thursday we had seen most of the raptors including Kestrel (everywhere) and Sparrowhawk (one at Calgary). We only dipped on Merlin and Peregrine.

Friday was a day of sunshine and showers (and rainbows) and was initially spent upgrading our accomodation from our tent to one of the large marquee type tents available for rent on the campsite (£30 a night). These tents are very large and the next best thing to a cottage. Included are comfortable camp beds, tables and chairs, and heating.

After moving house we headed south a couple of miles to Lochdon where a lone Greenshank and a couple of Curlew were on the shore. We drove down to Grasspoint and had views of White-tailed Sea Eagle, Hen Harrier, Golden Eagle and numerous Buzzards. In Lochdon an otter fed on crabs. It eventually came to the shore but the light was too poor for any decent photos, drat!

Later we drove down to Loch Scridain where we watched another Otter feeding on crabs. This one eventually headed for the shore near where we sat. On reaching the rocky shore it vanished amongst the rocks, double drat!

Saturday and we were off to the Isle of Iona. We left our crossing to the afternoon to avoid the tourist crowds that arrive by coach each morning, on the ferry from Oban.

On the way to Iona we stopped off at a couple of quiet beaches, Port of Uisken and Kintra, not far from the ferry port at Fionnphort.

The area here is the least hilly of Mull and it was around here we had Stonechats and Wheatears, and more Buzzards, of course.

On Iona we walked past the Abbey to the stunning beach at the Northern tip. On the way there were large flocks of Starlings and Twite feeding in a newly cut meadow. Oh, and a single Ruff. We also added Jackdaw to the trip list, but dipped on Tree Sparrow which have been recorded around the Nunnery. We didn't see any Nuns either.

It was too late in the year for Corncrakes, which at least meant we didn't have to spend a frustrating few hours hearing but not seeing.

Sunday was another stunning day weather wise so we set off to do the scenic route from Salen to Loch Scridian. We stopped off to visit the Macquarie Mausoleum at Gruline on the way. There were alot of Ravens here just to add to the atmosphere! There were also a couple of mentalist cocker spaniels, in one of the local gardens you have to pass through on the walk to the mausoleum, which don't like other dogs. You have been warned! Thankfully the owner was on hand to drag them off before I battered them with my tripod.

Enroute, at Loch Na Keal, we had all the eagles again, and a Skylark. Have no doubt, if you visit Mull you will see eagles, unless you have a dog with a high vis jacket and a metal lead :)

Passing by Loch Schridain we stopped to see Otters, but with the tide out they weren't showing. Just a few Golden Plover to photograph.

On our way back to Craignure, we stopped a couple of miles before Lochdon to look for Short-eared Owls that frequent a large area of grassland that rolls out to the hills. Apparently this was a good area for them earlier in the year. While the owls were a no-show we did watch rutting Red Deer stags on the hill side. A couple of stags had a nasty shock when the biggest stag you have ever seen came over the horizon towards them. This huge beast quickly chased the other two stags, but not before clashing antlers with one of them. An exciting end to our trip.

Email ThisBlogThis!Share to TwitterShare to FacebookShare to Pinterest
Labels: Isle of Mull Trip 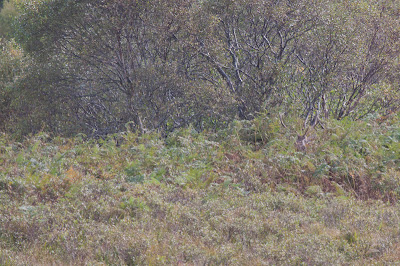 This photo was taken on the Isle of Ulva. Can you spot the Red Deer Stag?
Posted by Tim Sexton at 16:51 No comments:

Arrived on Mull, Wed afternoon, as the remnants of Katia was departing. By all accounts it had been pretty grim! We setup camp at Craignure campsite, and an evening walk along the beach gave us out first Otter of the trip.

Prior's Haven of Tynemouth has been good for migrants of late, with good numbers of Willow Wren, Mavis and Blackies.


If you pay a visit, checkout the Sea Buckthorn and Elders, berryfull, around the Haven car park, south of Prior's Park (or Knotweed Park - badly infested with Japanese Knotweed).


The cliffs around Tynemouth Priory are pretty much a dead cert for a 'Windhover' or two. If you want a gripping 'hover' shot then this is the place. I'm yet to succeed :(
Posted by Tim Sexton at 18:59 2 comments: