One of the joys of mothing is you just never know what you're gonna find in the morning. The trap was full of joy this morning thanks to a warm, windless night - perfect moth trapping whether.

Amongst the species caught were two real rarities:

Psychoides filicivora had only been recorded once before in Northumberland in 2009. Two were trapped in the county last night including this one in my trap.

This Mompha epilobiella is only the fourth record for the county.

This Lunar Hornet Moth emerged this morning from an old Willow Tree stump that Tom Tams had in his shed. He noticed the characteristic holes made by the larvae, so kept it to see the moths. Something of a mythical creature in Northumberland, rarely ever seen. An amazing beast.
Posted by Tim Sexton at 19:56 3 comments:

Willowob cuties and a Scorpion 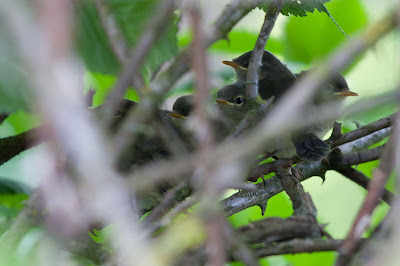 Walking near Humshaugh this evening I came across six beautiful Willow Warbler fledglings in a roadside hedge. This puts my garden Blackbirds to shame, the best they manage is two eggs and one fledger! 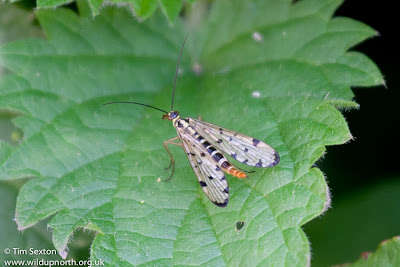 Nearby I found this female Scorion Fly Panorpa germanica
Posted by Tim Sexton at 22:56 No comments: 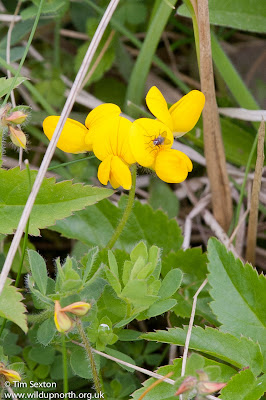 This picture was taken on the North coast of Scotland and initially I thought it was just Bird's-foot Trefoil, but it's just too hairy and big. Can anyone confirm that it is infact Greater Bird's-foot Trefoil? Click on image to enlarge. Thanks in advance.

The one that got away, at Arcot

Tom and I went on a mothing mission to Arcot today, and hilariously regretably Tom botched the potting of a very small pug which he is convinced was something notable. Ooops!

Still, we had a few good moths;


There were several species of butterfly on the wing including, 1 Small copper, 2 Wall, several Orange Tip & Green-veined White's. And the insect life was quite simply, abundant..................
Birdwise the place was lifting with Sedge Warblers, Whitethroats and Reed Buntings. On the pond, a pair of Shoveler and a single Common Tern fishing.
Posted by Tim Sexton at 22:53 4 comments:

Email ThisBlogThis!Share to TwitterShare to FacebookShare to Pinterest
Labels: Arcot


A fantastic moth trapping session at Kielder on Tuedsay night, resulted in the capture of a Light Knot Grass. A rare species in Northumberland (last recorded 2000), and a new species for my mothing compatriots - Tom Tams & Keith Dover.


We were expecting the midges to be biting and went prepared, some more than others :) 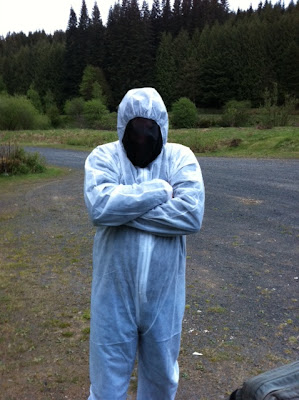 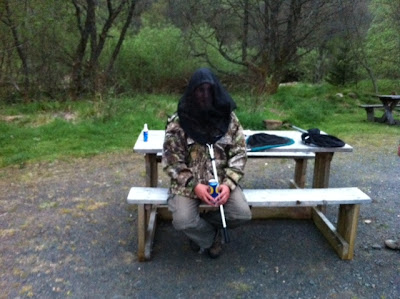 New moth trap does the biz

My new skinner trap went out for the first time last night, and I was rewarded with a superb Alder Moth this morning. A terrific start to the new mothing week!


This is only the 20th record for Northumberland, and the earliest recorded by 20 days.


The new trap was made for £20 (not including electrics). The previous trap was bought ready made for £60 (not including electrics) and was pretty poor quality with plenty of gaps for moths to escape, and suffering from warping due to the thinness of the ply used. Thanks to Tom Tams for his power tools, joinery expertise, time, coffee and chocky bickies.
Posted by Tim Sexton at 20:20 2 comments:

A day of firsts

The first task this morning was the daily checking of the garden moth trap. On the walk across the garden the first Swift of the year flew over. In the trap my first Rustic Shoulder-knot of the year.