A lovely sunny day with hints of Spring; Skylark singing, Willow catkins bursting forth, and Great Tits calling from all angles. Underfoot, plenty of ice, and according to the met office there's the possibility that the mild winter may have a sting in it's tail - hopefully while I'm filling my bins with new species in The Gambia :)

In the fields between Holywell Dene and the Obelisk were unusually large numbers of Tree Sparrows 100+, along with Yellowhammers and Reed Buntings. I've never seen such numbers.

The number of White-winged Gulls has been increasing further North in places like Shetland, so it was only a matter of time till a few spilled further south - well North actually - North Shields Fish Quay.

A look this morning revealed nothing. The tide was out, so poorly timed. Wind on a few hours to 3pm and, with a high tide and trawlers returning, there were plenty of Gulls including 3 Iceland and 1 Glaucous.

More spring than mid winter, making a laughing stock of the 'alternative' weather forecasters who had this winter down as the start of the new ice age.

Walking along the Waggonway towards Holywell Dene, I scored early with four Tree Sparrows by Whitley golf course - my first record of this species in Whitley Bay. A single Goldcrest by Churchill playing fields was also quite unusual. I rarely see these on the coast outside of autumn when they can be found in their thousands on a good year.


Along past St Mary's Wetland, and I see there are now a number of bird tables. A lone Woodpigeon took advantage. 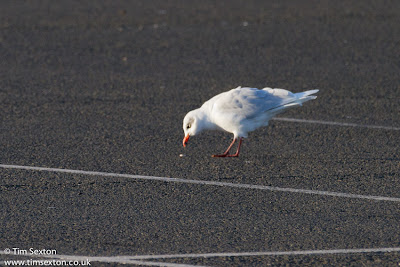 On passing by the Brierdene Car Park a Med Gull hung around for scraps.
Posted by Tim Sexton at 15:55 3 comments:

Well, with 4 hours till next year, there's precious little time left to catch a moth in December. I'm not giving up easily - the trap is on full blast.

See you all next year.