Some pond life at Whittle Dene reservoir caught my eye last weekend. If only my pager had done the same yesterday when the mega turned up at Hartlepool!

The number of Tree Bees (Bombus hypnorum) have increased greatly over the last week, with numerous worker bees collecting pollen and nectar on the newly flowering cotoneasters along our street, and in the local park. In my attempts to locate any nest I tracked them from the local park, back along my street, only to find the nest under the eaves of our house!

A number of other bees seen included this nectar guzzling Tawny Mining Bee.


Swifts go "Amber" as UK population crashes
Nature conservation organisations in the UK last year put the Swift on the "Amber" list of birds at risk, in recognition of the population having almost halved over the past fifteen years. While Amber status alone will not provide a remedy for the decline, it will bring institutional and political attention to the Swift's plight, and will give added credibility to our campaign to ensure that existing colonies are no longer eliminated quite so casually by builders and developers. It may also help to persuade institutions to help Swifts by creating places for them in new building projects.

My own efforts have so far involved installing a double swift nest box, that is currently home to two successful Starling broods, another species in decline so I'm not too fussed. Fledglings are nearly ready to leave, and the parents are getting quite raucous in their attempts to entice their offspring to leave the nest.

Swift boxes can be made starling proof, something to bear in mind as I assess where I can put another. Unfortunately I have no proper eaves, but I do have a chimney :)


Go on, get a swift nest installed today. Lots of guidance here - http://www.swift-conservation.org/

Please leave a comment if you intend, or have taken action, and let me know if you have more success than I have!
Posted by Tim Sexton at 12:30 No comments: 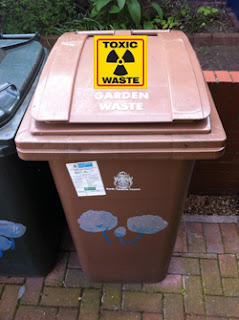 Have you ever wondered what happens to the garden waste collected in your brown bin?

And should people happen to put Japanese Knotweed in it, what happens to it?

Food for thought!
Posted by Tim Sexton at 18:03 No comments:

The final draft of is now online of the Newcastle & North Tyneside Biodiversity Action Plan:

Cuckoo in my garden

The first Cuckoo Bee I've seen this year, and a first for my garden. This one takes over the nests of Bombus terrestris, the Buff-tailed bumblebee.
Posted by Tim Sexton at 08:54 No comments: