If you go to the Ski resort of Solden, in the Austrian Alps, head to the restaurant at Tiefenboch. At the entrance to the chair lift at the bottom of red run 35, the staff put out seed for the Snow Finches. At 2796 metres (9171 ft) is this the higest feeding station in Europe?

The following vid, rather dodgy due to being taken on my phone, also shows Alpine Chough (Pyrrhocorax graculus).

The real highlight of the week was a young Golden Eagle (Aquila chrysaetos) spotted from my hotel balcony - a lifer for me.

Finally, the week came to a predictable end at Innsbruck airport, when our incoming plane was diverted to Munich due to bad weather. A four hour delay gave me a chance to join the group gathered on the airport viewing terrace.. 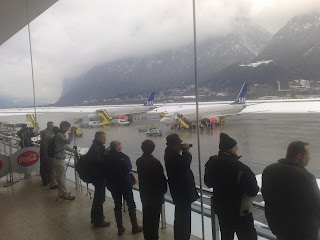 747s showing well but no sign of the Thomas Cook bird.
Posted by Tim Sexton at 10:32 No comments:

Off to the Austrian Alps tomorrow for a weeks snowboarding, bins in pocket, ready for a few new birds. On previous trips I've had Nutcracker, Snow Finch and plenty of Alpine Chough. Hoping to get some raptors this year, maybe a Lammergeier - hope it's not feeding on my bones :o
Posted by Tim Sexton at 12:31 No comments:

Large number of Common Gull on the sea off Whitley Bay and a large movement of Black-headed Gull going south. At the north end of the beach there were another four Rays Bream washed up (see last post). At St Marys, waders included Curlew, Oystercatcher, Turnstone, Sanderling, Dunlin and two Bar-Tailed Godwit.

Found the remains of this fish on Whitley Bay beach last Tuesday. Anyone know what it is? 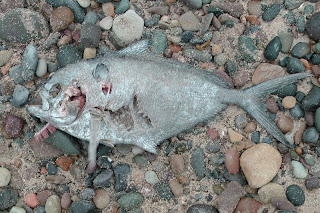 Thanks to Davy T it's now been identified as a Rays Bream (Brama Brama).It is a common bream in southern European waters, less common in northern seas. An open sea fish which migrates northward according to water temperature (really?).
Posted by Tim Sexton at 11:54 6 comments:

Look, a Little Auk in the hedge!

My first twitch of the year saw me heading off yesterday morning for Newholm, near Whitby, to see the Black-throated Thrush. I got there at around 11 30am and was hardly surprised when I found that it had not been seen for 2 hours - not since a cat had literally come within a whisker of getting its claws into a Siberian breakfast.

No sooner had I started to get that sinking feeling, the thrush landed in the garden right in front of me. Jostled amongst the birding paparazzi I managed to grab some video.

There was a good selection of other birds in the garden including blue, great, coal, marsh and long-tailed tit.

For the keen bunch of Geordie birders who had arrived at dawn, their reward was a Barn Owl that obligingly landed on a post next to where they were parked. A local resident said that it's a regular at dawn and dusk. While having a crack with the Geordies, one of them asked if I had seen the Little Auk. Answering "No, where is it?", they pointed to the hedge behind me. Sure enough, there in the hedge was a Little Auk! 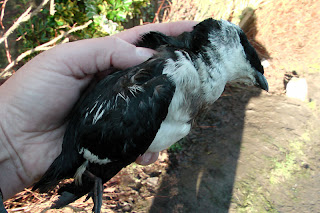 Sadly, it was a deceased individual that had been oiled and presumably crash landed in the village. I look forward to seeing one with a pulse.

The fun wasn't over yet, and a number of the group headed off to the South Gare near Redcar to see the Black Redstart and Snow Bunting. I drove right to the end of the Gare and immediately a large flock of 50+ Snow Bunting lifted from the beach. With several scopes now set-up in various directions 3 Red-throated Divers were quickly picked up including a couple just off the point.


A wander to the estuary side of the Gare found the Black Redstart feeding along the rocky shore. Job done :) 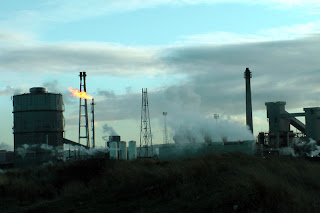 They're not called smoggies for nothing.

The 2 Bewick Swans were still near Newsham this afternoon, grazing within a group of Mute Swans. The Bewick is the smallest of the swans that occur here with a shorter-necked and more rounded head shape. While bill pattern varies, it always shows more black than yellow (opposite in Whooper Swan).

I was passing Tynemouth boating lake just before dusk and pulled over to work through the gulls. There were plenty of ducks including a couple of Pochard and Wigeon, and the usual contingent of Tuffties. The gulls all checked out as expected with mostly Black-headed  Gulls and a couple of Common Gulls.

Is this your Knot?

This colour ringed Knot was in the Brierdene Car Park on Whitley Bay sea front. Does anyone know what these rings might tell us about this bird?

A run up to St Marys gave me 13 Pale-bellied Brent Geese on the rocks north side of the causeway. As you can see and hear, it was rough out there. See if you can spot the immature Eider passing behind. If you can ID the waders that zoom past then you're cooking on gas!

A Great Tit singing in our street this morning put spring in my mind, that was until I went outside, brrrrrrr.

The gale force Siberian winds made any prolonged birding painful - streaming eyes and numb face and fingers in 60 secs. I started at North Shields fish quay and worked my way up to St Mary's (in a warm vehicle). Not much to report other than 3 Common Scoter in the bay at the north end of Whitley beach. There were other ducks at sea worth a check but the wind made the use of a scope impossible.

It was good to see Redshank, Turnstone and Oystercatchers back on the links, able to get there beaks into the ground at last.

The Barnacle Goose is still at Tynemouth boating lake.
Posted by Tim Sexton at 20:56 No comments:

Up for the Larks at Whitley 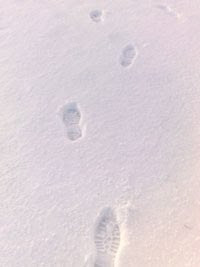 "I am just going outside and may be some time."

Now I'm not a morning person but just before dawn it was on with the hiking boots and a ruck sack loaded with bird scran and off to Whitley links to feed the larks. As a double whammy for the birds, the easterly wind has picked up. The first birds I saw were 2 Skylarks flying over the dome. Walking along the promenade the birds were conspicuous by their absence. The tide was high with plenty of Redshank, Turnstone, Sanderling and Gulls. Heading past the end of the promenade and along the golf course there was a single Redwing. As I approached St Mary's I was starting to wonder if there would be anything there to feed!

I walked around the wetland, or should that be iceland? There are a couple of small areas of open water where the Teal, Gadwall, Wigeon and Mallard have huddled together. There were numerous Snipe, some on the wetland, some in the adjacent fields and some along the road edge where there are a few puddles thanks to some moving water. A couple of Woodcook were flushed as I walked round. I put seed around the wetland in the sheltered spots. A couple of Skylarks were in the car park so rest of the seed went there. 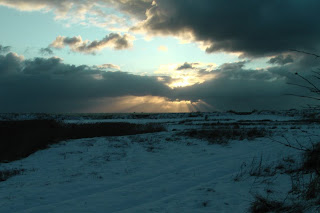 On the walk back, a couple of year ticks, indeed a patch tick! Firstly, a female Snow Bunting that landed briefly on a fence post before heading off over Whitley. Next came 54 Brent Geese flying low over the beach heading north. 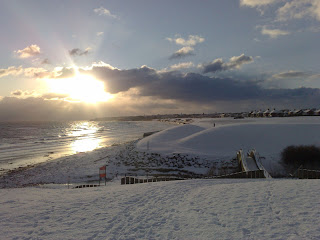 If you speak to your local school you should find that, as part of a healthy eating initiative, children are given fresh fruit daily. Only they don't eat it resulting in tons of apples, bananas and oranges going to waste. I've arranged to collect left over apples from a local school to feed the local thrushes. They love them, and it's just what they need at the moment.

And now the fieldfares have arrived. A new garden tick! 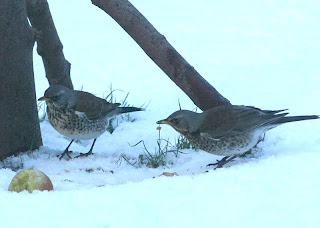 Went to North Shields fish quay in search of a white winged gull and found nothing other than the usual suspects (GBBG, HG, BHG, KW). Gulls looked especially grumpy today - could it be the weather?

Tyre count went well with 70+ on the beach. 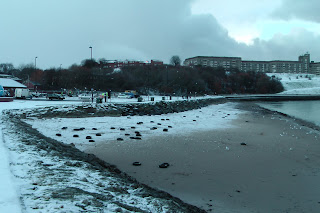 Oh, and what's this all about? 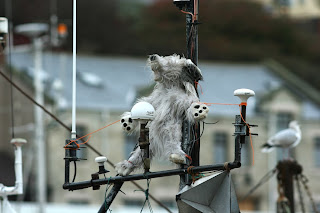 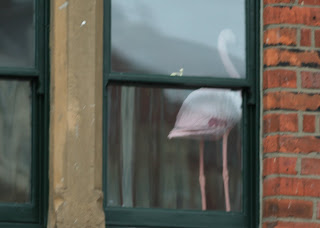 Decided to go get a lifer today, so drove up the coast to High Newton and scoped a Lapland Bunting amongst the Skylarks. It wasn't as easy as I thought it might be as there were hundreds of Skylarks all of which I had to scope before I got lucky. Worth the effort though. Even the drive up was worth it picking up a few raptors along the way with Sparrowhawk, Kestrel and two Buzzards together over Warkworth. Oh, and before I forget, a couple of Whooper Swan in a field near the QE2, Ashington. Not a bad trip at all.
Posted by Tim Sexton at 17:47 No comments:

600 + Skylarks heading south on Whitley beach during a 40 minute walk. A single kestrel and a grey heron being mobbed by a herring gull over the sea. Might go look for the Iceland Gull at Holywell in the morning.

Getting to grips with gull identification
Gull identification is a complicated thing and I'm pretty rusty so I've been down to North Shields fish quay and started taking pics of gulls to then ID at my leisure. Evenings are now spent zooming in and checking every feather for pattern, colour and wear & tear. It is a steep learning curve but I'm getting there thanks to a great website: http://www.gull-research.org/

Can you ID these fellows:

Create a Sonagram
It has been said that 'You truly have to see birdsong to believe all that birds do'. Well, I'll let you know. I've ordered a microphone and a few other gadgets and hope to be making some recordings very soon. If you see some nut waving a 'dead cat' around, it's only me.

Get back ringing
I rung birds for a couple of years about 8 years ago, but in the end other priories got in the way. Now, with more time on my hands I thinks it's time to get back involved. Nothing beats the fun of a Great Spotted Woodpecker hammering at your fingers!